The new T-100 Tension Tool is now available in a special starter kit!

The shur-loc® Elite Stretcher features a two part, user replaceable, stretcher strip. The E-Series Replacement Stretcher Strip is also used for the T-200 Series Stretcher and is made up of two 11″ pieces that can be replaced by sliding the strip out of the stretcher tube and replacing it with a new strip. The T-200 Series Replacement Stretcher Strip consists of 2 pieces that can be used independently from each other and replaced as needed. There is no need to replace both strips at once. 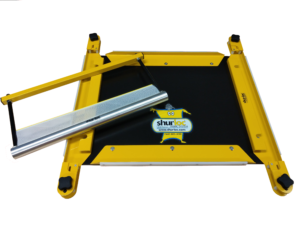 – Works with the Elite Series Stretchers –

– Remove the Endurance Rod from the damaged strip and remove it from the tube. Insert the rod into the new strip and slowly slip it into the Endurance Connector that is installed in the stretcher tube
– Each strip can be replaced independent of another
– Simple no-tools required change over

There are no reviews yet.